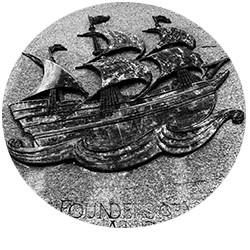 The first Founders List was literally carved in stone when the Sons and Daughters of the Pilgrims, erected the impressive Founders Monument on the site of the first meeting house on Palisado Green on May 30, 1930, the three-hundredth anniversary of the arrival of the Mary and John in the waters off Nantasket. That congregation formed the nucleus of the collection of several groups who settled in Windsor before the end of 1641. That day in 1930 marked the 300th Anniversary of the organization of the First Church in Windsor on the dock in Plymouth just before the Mary and John set sail. Many turned out for the church celebration that day 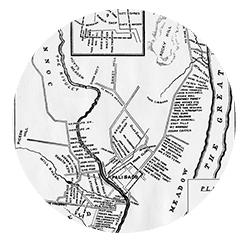 In their enthusiasm, the organizers of the monument put on the names of many settlers who arrived well after the pioneer years, including Elder John Strong and Sgt. Josias Ellsworth, names that must be recalled in any remembrance of early Windsor families, without specifying just how early. Other names were left off — any who came with the Holmes party from Plymouth in 1633 and many of the servants who came with the Stiles and other families. Virtually all the wives were left off. Another list of early Windsor settlers was apparently developed for the town’s Tercentennial in 1933. That September, the Hartford Times published a list of founders of Windsor which still circulates. That list suffers from the same inclusion of families arriving much later than 1635 and the same exclusions.

In 1983, the Windsor 350th Anniversary arrived. Working on behalf of the Windsor 350 the Anniversary Committee, Stephen Simon and Kent Avery developed a list which included all those in Windsor before1650, the cutoff date based on a map in Stiles’ first volume. To develop their list, they combed the Barbour Collection of Connecticut Vital Records for Windsor and the listing of householders in Stiles’ first volume. That list was published in the 350th Anniversary Committee booklet, The Settlement of Windsor, Connecticut.

When DFAW was organized in the summer of 1983, a Founder was defined as anyone in Windsor by the end of 1640, a cutoff point intended to coincide with the date established by the Society of the Descendants of the Founders of Hartford based on the final land distributions there and by the closing of the Great Migration after the Puritans came to power in England. Additions to the Founders List were made in our earliest years on a case-by-case basis, usually by petition of someone whose ancestors had been overlooked in earlier compilations. As time went on, the late Donna Siemiatkoski and Carolyn Porter-Fraher discovered that in Windsor the grants from the plantation did not stop in 1640 but continued to be made through the summer of 1641. Based on this information, DFAW altered the definition of a Founder to include all those individuals found on records pertaining to Windsor before the close of 1641, thus tying the Founders Era to the recording of the grants from the plantation (the original proprietors). However, we include anyone who is on record in Windsor at that time whether landowners or not.

At its November 30, 2020 meeting, the DFAW Board, based on recommendations from the History Committee, voted to remove John Osborn from and to return Richard Osborn to the DFAW Founders List and to remove Thomas Marshall from and retain Thomas Marshfield on the Founders List.  The rationale behind those decisions is outlined in the Winter 2021 issue of the DFAW Newsletter.

This website uses cookies to improve your experience while you navigate through the website. Out of these cookies, the cookies that are categorized as necessary are stored on your browser as they are essential for the working of basic functionalities of the website. We also use third-party cookies that help us analyze and understand how you use this website. These cookies will be stored in your browser only with your consent. You also have the option to opt-out of these cookies. But opting out of some of these cookies may have an effect on your browsing experience.
Necessary Always Enabled
Necessary cookies are absolutely essential for the website to function properly. This category only includes cookies that ensures basic functionalities and security features of the website. These cookies do not store any personal information.
Non-necessary
Any cookies that may not be particularly necessary for the website to function and is used specifically to collect user personal data via analytics, ads, other embedded contents are termed as non-necessary cookies. It is mandatory to procure user consent prior to running these cookies on your website.
SAVE & ACCEPT